Wellness and the woods

Exploring the Japanese practice of Shinrin-Yoku in the Redwoods

You’re probably thinking, what the heck is ‘shinrin-yoku'

So let’s get that out of the way first. The direct japanese translation of shinrin-yoku is “taking in the forest atmosphere,” and loosely translates to “forest-bathing.” In America, we might compare this to hiking, or simply going for a walk in your local nature preserve. While this may seem somewhat anticlimactic to the 14’er climbing folks, there are strong reasons why this practice is considered both therapy and medicine in Japan, South Korea, and so forth. The Japanese Forest Society, led by highly esteemed doctors, distinguishes certain steps to forest-bathing, as a prescription for an array of ailments. If you look into the mental health history of Japan, you won’t like what you find. There are documentaries and articles that outline the repercussions of a culture that is, comparatively, a bit unsocial. Normal work days in Japan last around 13 hours and the reported commute is approximately two. Shame is another focus in Japanese culture that make mistakes or shortcomings, life threatening rather than opportunistic.

Having been to parts of Japan myself I can say, without a doubt, that it is one of the most beautiful places on this planet. Kyoto is gothic: alluring the coolest artists, cooks, writers, and nomads from all over the world. Tokyo is bright and loud but also… clean. Freakishly clean.

It is no surprise that the soft shinrin-yoku practice is gaining momentum. With an intense culture, which we’re all familiar with to an extent, a softness is necessary. Three weeks ago I moved to San Francisco. I’ve never lived in a “real” city before and while I knew I was leaving behind the daily dose of mountains and 300+ days of sunshine, I didn’t realize the immediate effect this would have on me.

Quickly, my body began to ache from biking up steep hills. My mind became cluttered with an onslaught of new stimulus. When I went to yoga, there were so many people, it was hard to enter the calm headspace that I had relied on the yoga space to provide.

Luckily, this past weekend I traveled to Humboldt in Northern California on a project to gather stories from local farmers. After a couple of days well spent at work, the team took Sunday to explore the Redwood Forest. We began in Fern Canyon. Light wove in and out of shadows and branches, creating fluorescent and neon hues of green. It smelled of sodden soil and fragrant herbs. I heard water dripping from the canopies above into shallow pools that we walked over on wooden bridges. It was nothing short of a dream come to life.

We wore light coats and pants for the ideal mid 60 degree weather. Overhead there were fallen trees. We heard children laughing, splashing as they fell off of the narrow planks, and calling for their mothers’ deeper into the canyon. We walked in silence, shocked by the demanding peace ingrained in the place. 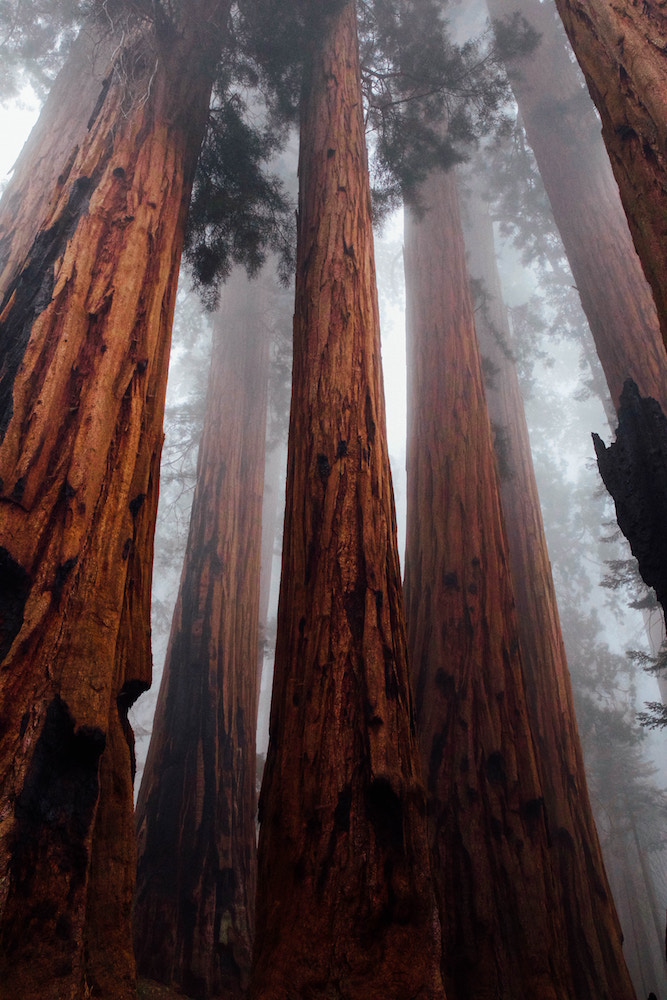 Soon enough we were engulfed in redwood trees. Being as tall as they are, the forest turned shaded and silent. As we continued on, we fell away from one another. We walked on our own, gazing up and through the trees to see what secrets we could find. The sound of my feet against the ground made a hollow sound, methodically leading me through the winding path. My mind was clear and a deep, warm feeling filled my stomach. Maybe it is the trees themselves that demand this state of being. In dramatic contrast, I felt at peace again.

But, in consideration of shinrin-yoku, it isn’t always this easy to relax in the forest. I remember a friend, before I had gone to the redwoods remarking, “The Redwoods? I’m terrified of that place…”

Of course, there are also experiences of fear and anxiety in the forest. It is often on these long walks that I ruminate on some of the most challenging things. It is powerful to be surrounded by elements that just are without demanding anything in return. On one hand, the trees allow you to be, yet you also feel an overwhelming sense of support, as if the trees themselves are watching and listening. It forces you to turn inward and quiet down when most of our natural inclinations are to do the opposite. I would argue that’s the therapy. We walked on for a long while. We could’ve walked all day. But, we found an enormous redwood that demanded us to stop. Each of us took turns standing beneath it, looking up toward the unforeseeable top. It would’ve taken a town to wrap their arms around the trunk - an entire town could’ve lived in the tree if it were hollowed! Standing small before it reinstated our belief in the world and ourselves, a strong paradox that only nature has the ability to make you see starkly.

Shrinrin-yoku is like yoga, it is accessible in many forms. The demand is that you show up in nature without distraction to move your body, quiet your mind, and to appreciate what is in all of its grandeur.

If we surrendered to earth’s intelligence we could rise up rooted, like trees. by Rainer Maria Rilke